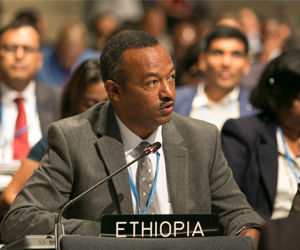 As a delegate of the Federal Democratic Republic of Ethiopia, Mr. Endalew has been involved in negotiations under the UN Framework Convention on Climate Change since 2008. Having been a core team member of the Ethiopian Negotiating team, he was elected Chair of the Least Developed Countries Group in the climate change negotiations process for a two-year term, beginning in January 2017.