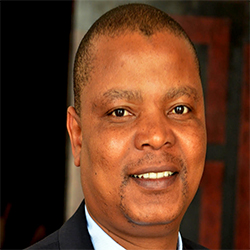 He has in-depth knowledge and experience of the landscape of adaptation under the UNFCCC. He has contributed towards the evolution of the main instruments for supporting countries on adaptation, such as the national adaptation plans which were established in 2010. He has also contributed towards the development of technical tools and methodologies, and the capacity-building of the LDCs to effectively lay the foundation for and implement adaptation actions.

Motsomi participates in the United for Smart Sustainable Cities (U4SSC) initiative coordinated by the International Telecommunications Union and the United Nations Economic Commission for Europe. He co-led the work on the application of information communication technology in climate change adaptation in cities, and currently contributes on the work on Guidelines on Strategies for Circular Cities.

Prior to joining the secretariat Motsomi worked for the Government of Lesotho, with leadership roles on climate monitoring, development of climate scenarios, development and implementation of climate change adaptation actions and policy advice to the Government. He represented the Government of Lesotho in various regional and international programmes on climate and climate change including under the UNFCCC. Because of his exemplary roles Motsomi was elected Chair of the LDC Group in 2009.